Nation leader N.A. Nazarbayev considers caring for the present and future of youth the main principle of his policy. It is well known that traditional annual messages contain fundamental guidelines for improving youth policy, since young people play an important role in the state as part of society. November 25, 2019 assistants of the department “Nutritionology with a course of preventive medicine” Ergeshbaeva RB and Serzhanova G.N. curators 17-001-1.2k, 17-002-1k groups of the faculty «Public Health», under the program «2019 — Year of Youth», visited the Museum of the Kazakh National Medical University named after S.D. Asfendiyarova and got acquainted with the history of the university.

For students in the historical museum showed a video about the life of S.D. Asfendiyarov, where they received a lot of knowledge. Students expressed great gratitude to the museum staff.

Also, on November 22, 2019, the aforementioned curatorial groups visited the Kazakh State Academic Drama Theater named after M. Auezov for the play «Zhureik, Zhurek Auyrtpai» within the framework of the «Rukhani Zhangyru» program. The play «Zhureik, Zhurek auyrtpay» is a family drama created by an intricate form of relationships between people. At a staged performance, pressing problems of society are being promoted. All viewers were satisfied with the performance. The director of the play is People’s Artist of the Republic of Kazakhstan E. Obaev.

At the beginning of the performance, students visited the Museum of the Kazakh Academic Drama Theater named after M. Auezov, which opened May 24, 1968, and saw more than 50 thousand exhibits of theatrical history. In general, it is advisable for us to find time and enrich ourselves spiritually, to broaden our horizons. 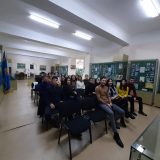 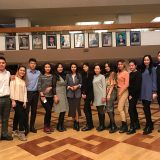 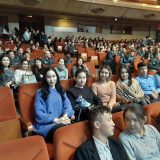 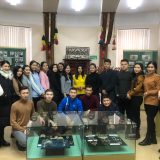 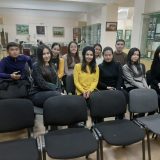