The Science and Innovations as the Basis for Economic Development Forum dedicated to the 25th Anniversary of Kazakhstan’s Independence took place in Almaty on November 18, 2016. At the Forum, a number of scientists with publications in authoritative scientific journals as rated by Thomson Reuters, were announced to have the highest citation rate. The event was organizedby the National Center for Scientific and Technical Information, JSC, the National Center for State Scientific and Technical Expert Evaluation, JSC, and Thomson Reuters with support from the Ministry of Education and Science, Republic of Kazakhstan. The Kazakhstan science and education notables, young researchers, representatives of research institutions and universities participated in the event.

The event was opened by AdilIbraev, the chairperson of the management board, the National Center for State Scientific and Technical Expert Evaluation, JSC. The prizewinners’ achievements,he noted,were gauged against their publication activity and citation rate based on the Web of Science (Thomson Reuters) information resource. Rapid increase in the number of publications by Kazakhstani scientists shall be regarded as the country’s success, believes AslanbekAmrin, Deputy Minister of Education, Republic of Kazakhstan, a speaker to the Forum.

Scholarly works by Kazakhstani scientists were gauged against their publication activity and citation rate, based on the Web of Science (Thomson Reuters) information resource,in three major categories. 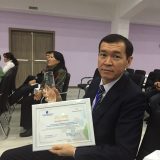 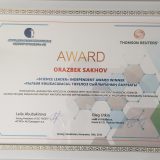 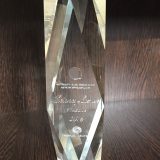