On-Line broadcast of a master class for traumatologists and surgeons conducted by specialists of the Korean Hyundai Hospital, South Korea

On October 4, 2019, from 10:00 to 12:30, an online master class for traumatologists and surgeons was held in one of the audiences of KazNMU, named after the outstanding South Korean surgeon, pediatric oncologist-hematologist, Professor Yu Chul.

Two operations — on the shoulder and knee joints, broadcast from the Taldykorgan Central Hospital, were brilliantly performed by a team of surgeons, headed by Professor Kim Boo Sob, General Director of the Hyundai Hospital, which is located in Namyangzhu. The partner of this hospital is the Health Center of Chung-Ang University in Seoul.

This event was made possible due to the fact that on April 10, 2019, a tripartite memorandum of cooperation between the KazNMU, Chung-Ang University and the Hyundai Hospital was solemnly signed at our university.

To attend the master class, 35 trauma residents of all training courses, interns, as well as 5 teachers of the Department of Traumatology and Orthopedics gathered in the audience named after Professor Yu Chul. At the same time, the master class was broadcast for students in the MUA. Thanks to the excellent video communication, the participants were able to actively ask questions and receive comments during the operations.

After the session, the students expressed their satisfaction with participating in the master class, as they could see the surgical intra-articular techniques used by Korean surgeons, the instruments and equipment used, and the teachers could compare them with their own practice.

The successful organization of the online master class took place thanks to the active support of the dean of the Faculty of Internship and Residency Zhankalova Z.M., as well as associate professor of the Department of Traumatology and Orthopedics S. Alkhodzhaev. Great support was provided by specialists from the Department of Information Technology. 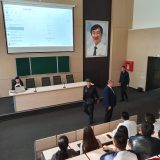