On March 20, 2021, the II All-Russian Online Olympiad in Digital Orthopedic Dentistry was held, dedicated to the memory of Corresponding Member of the Russian Academy of Medical Sciences, Honored Scientist and Honored Doctor of Russia, Doctor of Medical Sciences, Professor Vadim Nikolaevich Kopeikin. The team of the Kazakh National Medical University named after S. D. Asfendiyarov, the Department of Orthopedic Dentistry, completed the tasks of building a 3D scene in the Avantis 3D program and prepared a plan for the diagnosis and treatment of the patient. The team includes 4th year students of the School of Dentistry: Zhenis Zhamashev-the team captain, Aselya Alimbayeva and Kamila Vansinvin. The leaders of the team became head of the Department of prosthetic dentistry, Professor Altynbekov K. D. and associate Professor of the Department Nysanova B. Zh.

March 24, held an online video conference with the analysis of all stages of the Olympics, where the Professor Ryakhovsky Alexander, who personally considered building a 3D scenes in the program Avantis 3D, praised the team of Kazakh and introduced to other members as an example of the proper construction of a 3D scene.

4th year students of the School of Dentistry Zhenis Zhamashev, Aselya Alimbayeva and Kamila Vansinvin received membership cards of the Association of Digital Dentistry of Russia as a prize, where they will be able to study and conquer new heights of digital dentistry. The membership card allows you to participate in webinars, master classes, and lectures by leading professors in Digital Dentistry. 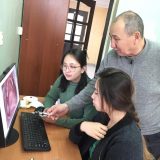 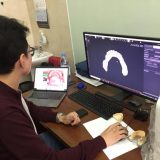