Prolongation of „German-Kazakh network on biosafety and biosecurity“

In 2013 the Kazakh National Medical Universitynamed after S.D. Asfendiyarov (KNMU), the Scientific Practical Center for Sanitary Epidemiological Expertise and Monitoring (SPC SEEM) of the Agency of Public Health and the Bundeswehr Institute of Microbiology (BIM)have started a fruitful collaboration in a project on highly pathogenic microbes as well as biosafety and biosecurity.

The project is financed by the German Federal Foreign Office within the “German Partnership Program for Excellence in Biological and Health Security”, which was launched in 2013. Since 2013 this program is involved in combating outbreaks of highly infectious diseases in 20 countries worldwide. In 2016 the Federal Foreign Office approved the prolongation of the second phase of the program and so the German-Kazakh collaboration project until 2019.

On March 30th2017,prorectorProfessor MaksutKamaliyevhas signed the prolongation of the cooperation agreement“German-Kazakh network on biosafety and biosecurity” betweenKNMU and the BIM.ProfessorLyazzatYeralyeva, Director of Atchabarov Research Institute of Fundamental and Applied Medicine of KNMUand members of her institute are the participating partners in the project.

In the upcoming second project phase of the “German-Kazakh network on biosafety and biosecurity”againprovides theoretical as well as practical trainings focusing on modern aspects of detection and diagnostics, surveillance studies and biosafety and biosecurity issues which are important goals to achieve results in improving the health aspects of the people of the Republic of Kazakhstan. TwoPhD candidates from KNMU will get the chance to be trained in an international PhD degree program at Ludwig-Maximilians-University in Munich, Germany, specializing in epidemiology, International Health and highly infectious diseases. Presently their application to the PhD program is under review. 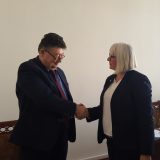