In honor of the 85th anniversary of the Kazakh National Medical University named after SD Asfendiyarov and the 20th anniversary of the faculty of  «Nutrition», professors of this department organized subject competitions with the participation of students of the 2nd course of the specialty «General Medicine», on theme: «Eat right, get charged! «with the support of the Department of the formation of socio-cultural competence of students. The purpose of this event is: improving the practical and communication skills through the promotion of good nutrition, instilling responsibility to work with the team, hone skills, team spirit and leadership development. In the competition took part teams like «Healthy salad», «Vitamin drinks», «Fruit desserts.» The contest consisted of several stages: the motto, advertising, presentation, workshop, degustation. Terms of the contest were made taking into account the development of skills in the five competence of students of medical schools. The jury consisted of: the dean of the specialty «General Medicine» — Zhumasheva RT, Deputy Dean, an expert of the Center of communicative skills — Kulash Omirzakovna, artistic director of the department of education — Saltanat Aykenovna objectively evaluate each round of the competition.

The first competition — «Advertising» with the motto, the team «Vitamin Drinks» in accordance with the name of the team, focused on the usefulness of natural juices and national domestic sour-milk products, and all this was presented in the national style. «Presentation» is a  part of competitions` conditions. It`s the scene, promoting a healthy diet, the formation of the nutrition principles and giving up bad nutrition habits, «Healthy salad» team showed a presentation, called «Cry of organs.» Organs, which became alive, was eating fast-food. These organs told about the dangers of malnutrition, which causes the diseases of civilization. Each team with their fans organized a flash mob in the «Fans competition», among them distinguished  «Vitamin Drinks» and «Fruit desserts» teams. During the «Master Class» competition participants had to prepare a healthy menu . «Fruit Desserts» team presented a set of different fruit compositions to a jury at this stage. The competition was intense and interesting, and first place won a «Vitamin drinks» team, «Fruit desserts»  took the second place with a little difference, and «Healthy salad»  took the third place. Every team and participants of the contest were awarded with letters of thanks and  Nutrition Department diplomas. The aim was to increase a confidence and form a creativity in students of our university. The jury and audience were grateful for the creativity and skills of students, for the knowledge gained in the course which was held at the Department of Nutrition and expressed a gratitude to the organizers and staff of the department for the event which was at the highest level and expressed a wish  to carry out this kind of activities for students in the «Arena » of University. 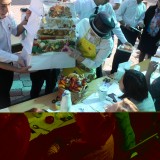 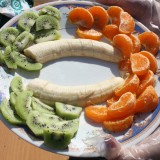 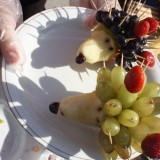 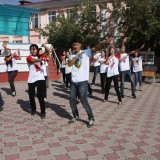 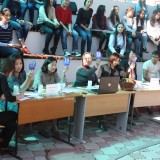 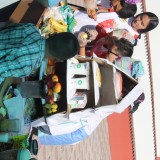