The 21st of February of 2015 year at the Central Park of Culture and Recreation held traditional winter family festival, it was organized by the Committee UNITY «Ekofest», also widely presented the program «Multiolympic game».

The purpose of the Olympiad — promoting healthy lifestyles and physical activity among young people and the population of the city, as well as improving the skills of sports games.

The program of the Olympic Games — the tourist playground, cycling, biathlon, streetball, a cheerful start, environmental quiz, planting trees, zumba dance, creative arts competitions, all teams involved in a tug of war to test their athletic skills. Our students, the team «KazNMU students» and «Avicenna» allocated with their knowledge, especially in matters of the environment, the ability of planting trees, as well as demonstrated team spirit, reflecting the priority command. Among the teams of all universities, our team «KazNMU students» was the best in the tug of war. On the art competition, our students sang songs. Sports students, who took part in the competition in their free time, not only promoted the active sport, but also participated in various competitions in order to maintain the reputation of the university, to win, to show their strength and organization of team spirit. Most importantly, our team, future doctors have proven that they are the best not only in education and medicine, but also the best competitors in sports. At the end of the Olympiad I- place taken by the students of the Academy of Tourism and Sports, II- place AlMU, III- place KazNU. In the team calculation, our team took 5 place. The winners were awarded with diplomas and gifts. All participants went with a good mood. 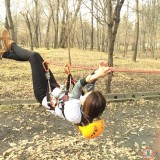 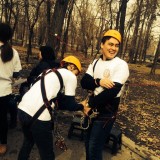 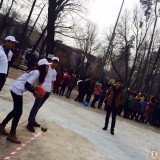 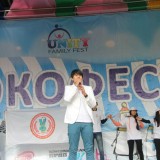 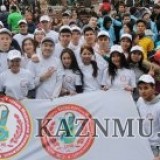 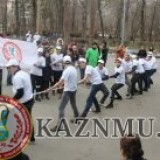